Skip to content
By Ricken Patel, Special to CNN
September 21, 2014 — Updated 1749 GMT (0149 HKT)
(CNN) — Scientists are normally a pretty measured bunch. But in recent months, they’ve been resorting to some unusual language to get our attention. One top climatologist recently tweeted: “If even a small fraction of Arctic sea floor carbon is released to the atmosphere, we’re f’d.” When scientists start swearing in public, it is time for everyone to start worrying.
It’s not just the scientists that are raising the alarm. This Sunday, hundreds of thousands of people are taking to the streets around the world in the largest climate mobilization in history. If they weren’t listening before, our leaders should tune in now. The voice of global concern for action on climate change is back, and this time it’s no longer an environmental issue, it’s an everybody issue.
And time is short. The world is rushing towards a series of potentially catastrophic feedback loops and tipping points in the climate system, which could see the support system of life itself irrecoverably disrupted. From the release of gigantic amounts of arctic methane gas, to the rapid carbon acidification of our oceans, to apocalyptic flooding, the continued warming of our planet is the greatest challenge our species has faced.
The stakes seem too gargantuan to grasp, but it’s this leap in consciousness that’s required for our survival. Our civilization is built on a fragile, delicately interdependent, and unsustainable relationship with the natural world. We can’t afford to underestimate the massive footprint that humans have on this planet. One quarter of the carbon dioxide in our atmosphere came from our industries. Our oceans are acidifying 10 times faster than at any point in earth’s history. We are stretching the limits of this world.
But none of this is grounds for despair. The solution to the nightmare of runaway climate change is crystal clear, and beautiful. We need to shift our societies and economies off dirty energy and on to 100% clean, sustainable energy, within a generation. This goal is entirely achievable. Already, 22% of the world’s electricity comes from clean energy and the sector is growing fast — we just need to put our foot on the accelerator.
‘I’m on the front lines of this crisis’ 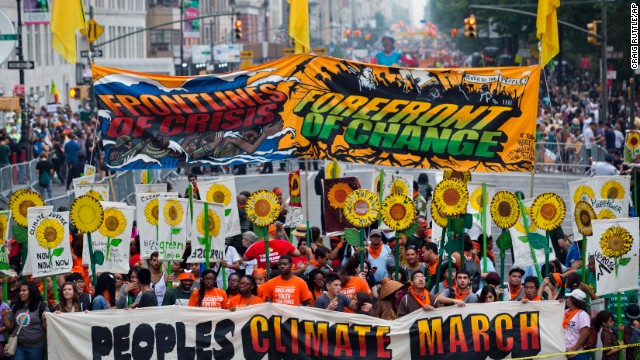 Photos: Rallying to stop climate change
Getting to 100% clean will require a massive battle against the oil and coal industry and their pocket politicians whose subsidies, profits and influence are all at stake. But this change is possible – we now have the alternative energy technology we need to replace fossil fuels. In May,Denmark published a plan to get to 100% clean by 2050, at a cost of less than 20 Euros per Dane per year. Countries as diverse as Norway and Uruguay are already nearly at 100% clean. Even China, the world’s biggest carbon emitter, is rolling out renewables faster than anywhere else on Earth.
The question is not whether we will make this breakthrough, but whether we do so before it is too late. The clock is ticking, the increase in temperature rising steadily towards the 2 degrees Celsius mark – the red line that both scientists and governments have said poses unacceptable risk of the unthinkable.
And that is why the People’s Climate March is so critical. There is a gap between the speed of action our survival requires and the action our governments are taking. The street is how we close that gap, because politicians will move faster when people move them. Most large-scale social change has been spurred by movements, from ending slavery to giving women the right to vote. Saving ourselves by shifting our societies to 100% clean energy will require one of the largest, most diverse, and most sustained movements we’ve ever seen.
On Sunday, that movement will step forward. A new cast of characters in an unprecedentedly broad coalition and cross section of society will take to the street. Climate change has gone beyond environmentalism, it’s now about the economy, jobs, justice, family, security. It’s about the survival of everything we love.
The UN Climate summit happening two days after the march is an opportunity to build momentum, no more. The Paris summit next year is when we’ll need our leaders to sign a new global agreement. If we learned one thing from the 2009 Copenhagen summit, it’s that one global summit will never be a panacea.
But the thud of peoples boots marching across the planet together with 130 leaders meeting to discuss a collective response to this crisis heralds a fresh momentum for the road ahead. Even before the mobilization has happened, political leaders are responding to it. Some are even joining the march.
In the final analysis, the question is whether we human beings are capable of being wise, farsighted, and unified enough to pass this test of survival. Many civilizations have fallen to the consequences of outstripping their environments. But our civilization is the first truly global one, with the power to end human life. One way or another, we may be the last civilization. For the sake of our children and their children, we must find the hope, wisdom and unity to save it.

Government launches strategy for next year’s summit, as Secretary of States highlights need for the world’s richest countries to pledge ambitious emissions cuts

By Jessica Shankleman
09 Sep 2014
Energy and Climate Change Secretary Ed Davey will today urge the G7 and G20 to set their own greenhouse gas reduction targets to ensure there are “no surprises” when the world comes to agree a new deal to tackle climate change in Paris next year.
Speaking at the government’s launch of its vision for a global deal on climate change today, Davey will argue that momentum is building for an agreement in Paris in 2015, whileb stressing that richer countries must take the lead in slashing greenhouse gas emissions.
FURTHER READING
“For the very first time we have the key ingredients in place that give us a real chance of a truly global deal,” he will say. “And while the negotiations will undoubtedly be challenging, I judge the prospects of a comprehensive climate change deal to be the best since we first began this journey many decades ago.”
With China, the US, and India all pledging national action to curb emissions post 2020, Davey will call for the EU to set a 40 per cent carbon reduction goal for 2030 and urge the G7 and G20 to follow suit. “Our vision is of a successful agreement in Paris that reflects the economic realities that reflects individual countries ability to make contributions, is sensitive to their industrial development and the standard of living of its people,” he will say. “We need an agreement that is credible – and fair – with emissions reductions from all countries – but with commitments that reflect the ability of countries to make reductions. Above all else, we will need to maintain the political will to secure an agreement in Paris.”
His comments come after a report by consultancy PwC published yesterday found that the world’s biggest emerging economies are by some measures outpacing the G7 in their efforts to cut the carbon intensity of their economies. However, the report also warned that while the global economy was steadily improving its carbon intensity a drastic increase in the pace of decarbonisation was needed to tackle escalating climate risks.
Davey’s intervention also comes just days ahead of a major UN climate summit due to be held in New York on September 23rd. The meeting is designed to provide further momentum to the UN’s parallel climate negotiations, but its likely impact has been diluted in recent days after it emerged Chinese President Xi Jingping and Indian Prime Minister Narendra Modi would not be joining US Presdient Barack Obama in attendance as originally planned.
It remains unclear whether David Cameron will attend the summit, with his decision likely to rest on the outcome of the Scottish Referendum next week. A spokesman for the Department for Energy and Climate Change (DECC) said a decision had yet to be taken on which minister would fly out to New York.
The government’s new vision for a Paris deal, unveiled today, underlines the scientific and political consensus on the urgent need to tackle global temperature rises, arguing that the UK is already being impacted both directly and indirectly from climate change, primarily through increased flooding and rising food prices.
The document also warns that the world is now “playing catch” up as a result of the failure to agree a comprehensive deal on climate change in Copenhagen in 2009. It says that without urgent action by 2020 we will have missed out on the  cheapest route available for cutting emissions. “This is a pivotal moment,” Davey will say. “It’s not quite the world’s last hope. And it won’t be the end of the story. But failure in Paris would see our chances of limiting climate change to manageable levels go down and the costs of doing so go up.”
The new document also highlights the growing opportunities for businesses to invest in low carbon technologies. Davey will welcome the fact that investment in renewables has outpaced that in fossil fuels for four years in a row and forced investors to weigh up the costs and benefits of climate change. “Our business community has recognised that decarbonisation and securing long-term prosperity go hand in hand,” he will say. “From the savings that can be made through energy efficiency to the growth prospects through the supply chain.”
But despite growing momentum ahead of the Paris Summit, many observers have raised fears that the “bottom up” approach that is likely to shape any new treaty, in which each country sets their own targets, will result in a weak deal that fails to limit global temperature rises to below two degrees – the amount many scientists argue is needed to prevent catastrophic climate change. Richard Kinley deputy head of the UN’s Climate Change Secretariat has already predicted the Paris deal will fail to hit the two degree target, but could include measures to ratchet up ambition over the following years.
The UK’s newly stated position could help go someway towards determining whether a sufficiently ambitious treaty can be delivered after all.